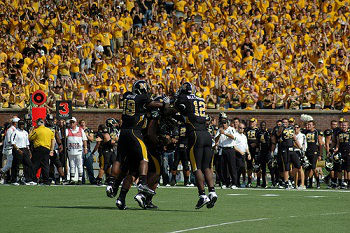 Wyoming let things get away from them a bit in their last outing at home against Washington State as the Cowboys went on to lose to the Cougars by a final of 19-41. We were able to successfully fade Wyoming last week as the hype got a little too high for the Cowboys coming off their nice 29-7 week 0 win over NMSU. Wyoming couldn’t get anything going against Washington State through the air as QB Vander Waal completed just 8/20 passes for 67 yards, while Wyoming gave on 319 passing yards to the Cougars.

Missouri built a lot of positive momentum down the stretch run of last season winning their final 6 regular season games including blowout victories coming in the SEC against teams like Florida, Tennessee, and Vanderbilt. Missouri opened the year in 2018 with another solid offensive showing as the Tigers took down UT Martin by a final of 51-14. QB Drew Lock might put up some of the best numbers in the SEC this season and Lock opened week 1 throwing for 289 yards and 4 TDs before being pulled.

Wyoming had their issues at time this past week on their home field against Washington State’s pass game and the Cowboys will run into similar issues here against Missouri on the road. We like Missouri to continue to light up the scoreboard as they go on to win and cover this larger spread.